Google Reader is being discontinued on June 30th. This is probably the web application I’ve used the most and for the longest so I was a little bummed when they made the announcement. I immediately started looking for its replacement.

I wanted the replacement to be something that had a liberal open-source license (so I could poke at the code and share patches) and something I could host myself to avoid having to worry about the whims of some big corporation’s product roadmap.

After some exploration, I found one called Tiny Tiny RSS. It used just PHP and MySQL, which meant I didn’t need to install or maintain any new things on my server. The code looked relatively sane and clean so I downloaded and installed it. Within probably half an hour, I had a very usable and surprisingly feature-rich RSS reader that even included an API. It’s also multi-tenant right out of the box.

The only caveat I had was that it didn’t have a usable mobile version. Today, I figured out that some kind developer had written a plugin that exposed a fever-compatible API which Reeder for iPhone supports. (Hint: After installing the plugin you have to enable API access for your account to make it work. In retrospect that seems obvious, but I had to printf-debug my way through the app to figure why it wouldn’t accept my username and password.) 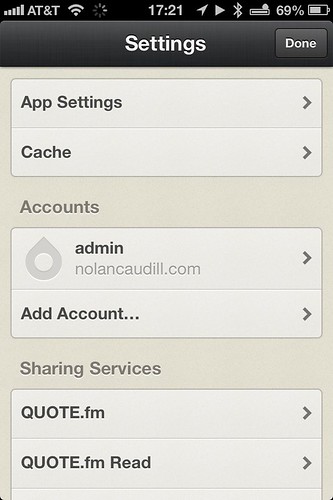 The end result of all this is that I have an RSS reader that will stay running as long as I’d like with no danger of it and/or my data being sold to the highest bidder along with a nice-looking iPhone app to read on the go.

This whole thing is also proof that the web can be resilient to vendor lock-in as long open standards (like OPML, RSS, HTTP, etc.) and the spirit that encourages them (like Reeder’s your-URL-goes-here screen) sticks around.